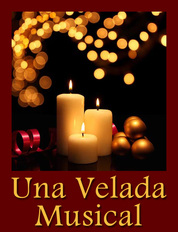 We chose to celebrate the end of our first year as a group with una velada, a soirée, a social gathering for music and companionship.  We held ours in our rehearsal space at the time, the South Sydney Uniting Church in Waterloo.

We opened the evening with a processional, Santa María, strela do día, a carol written during the 13th century reign of Alfonso X el Sabio (The Wise), and nominally attributed to his authorship.  We moved to three villancicos of anonymous origin, Dadme albriçias hijos de Eva, Yo me soy la morenica and Ríu Ríu Chíu, that appear in the sole surviving copy of a cancionero (songbook), printed in Venice in 1556 and rediscovered in the university library in Uppsala, Sweden, in the early 20th century.  From Uppsala, we headed for 17th century Peru and the Quechua prayer, Hanacpachap, then to night-time Galicia in the 16th century with Pase el agoa, a fairly bold song of hopeful seduction.  We allowed some of the sadness of life to creep in from the corners with Mario Castelnuovo Tedesco's wistful Memento (from his Romancero Gitano), and finally threw pity to the winds with a triumphant Adijo Kerida, a Ladino song of casting off failed love from Sephardic Spain.  Then, what was there left but to party joyously and bid farewell to 2010, our first year as a consolidated group. 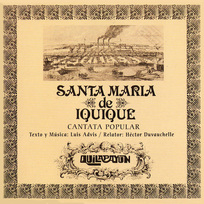 The Cantata tells the story of a tragedy that unfolded in Iquíque, a small town in north-west Chile, in 1907.  Many hundreds of nitrate miners and their families, struggling to survive and hopeful of a better future, gathered in the town to negotiate more equitable wages from the owners of the mines.  The mine owners bristled and called in their private armies;  the generals postured and a flashpoint was reached, leading to unrestrained rifle-fire and the deaths of hundreds, perhaps thousands, of the miners, their women and children.

The Cantata ends with a brave declaration that such a thing should never happen again, but history is cruel.  Less than three years after the Cantata's first performance by the Chilean folk group Quilapayún, the Chilean government of Salvador Allende was overthrown in a bloody military coup, followed by untold thousands of people "disappearing" in state-sanctioned mass murders.  The Cantata now stands as a memorial to both tragedies and a stern, though rousing, call for social and political equality.  It has become a much-loved standard, especially among Chileans in Australia.

The instrumental side of our production was provided by Trio Matiz (Hernan Flores, Janis Carter and Imogen Granwal), with Ricky Vargas (guitar), Gaye Thomas and Greg Gibson (flutes) of the instrumental tango group Alturas, and the production was augmented by guest artist Phillip Hinton as the Relator (Narrator).  The lead vocalists were Hernan Flores and Janis Carter, and the conductor was Margot McLaughlin. 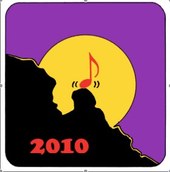 Our first time at the Blackheath Choir Festival was also our very first performance as a new choir.  We shared the relaxed Saturday Afternoon session with the Linnet Singers, the Mountain Opera Chorus and the Sydney Gay and Lesbian Choir, and a fabulous time was had by all.

We opened our set with Santa Maria, strela do dia, the 13th century processional accredited to Alfonso X el Sabio (The Wise), then offered Tomás Luis de Victoria's Jesu dulcis memoria, the anonymous Middle Ages Nativity celebration Dadme albriçias hijos de Eva and the Medieval Galician seducer's song, Pase el agoa.  We were joined by John McLaughlin on classical guitar for Memento, Mario Castelnuovo Tedesco's song of longing in the shadow of impending death.  We ended our performance with Alfonsina y el mar, Ariel Ramírez' paean to revered Argentinian poet Alfonsina Storni, who ended her faltering life by walking into the sea, and Adijo Kerida, a throbbing farewell to a failed love in the vibrant Ladino dialect from the Sephardic Jews of Spain.

The response was overwhelmingly positive.  Coro Austral had arrived!
2015 Performances